One Hundred Years of Championships at Carrickmines (2009)

One Hundred Years of Championships at Carrickmines (2009)

The Championship of Ireland came to Carrickmines one hundred years ago. The reason for the move is well-documented in the Croquet Gazette: there had been a crescendo of complaint about the condition of the courts at Fitzwilliam L.T.C., where the event had been played for the previous ten years. The demands of a full tennis season at the home of Irish tennis left the courts unfit for serious croquet competition. But the new lawns – seven of them – at Carrickmines were preserved specially for this tournament by the motherly care of Miss Barrett and her committee. Carrickmines’s ‘own’ tournament, the Championship of County Dublin, was played in May 1909, and the Irish Championship on its customary week, that of the August Bank Holiday. Later, with Ireland’s independence from the United Kingdom, the date of the holiday was changed to the start of August, and the tournament, after flirting with a September date, eventually rejoined it!

Originally a traditional 6-day week tournament, pressure of entries forced it to extend to a second weekend in the 1990s. More recently, it has been divided to give each event specific dates within the week, but this seemingly benign plan failed to attract more entries. This centenary year, the Championship events will begin on the Wednesday - the other events running from the first Saturday -and the whole event will finish with the traditional tournament dinner and prizegiving – so often the occasion of riotous celebration - on Saturday night.

There is a gracious tradition of hospitality associated with the week: the late Dr Steen’s house at Carrickmines crossroads was for many years the scene of a lavish garden party, and such Club members as Yvonne Marrinan, Padraig & Ann Thornton, Nial & Edwina McInerney, Joe Cunningham and Colin Rogers must be thanked for continuing this pretty custom. In busier years the lawns at Newcastle, Co Wicklow have been pressed into service, and our hosts – notably Harry Johnston- have generously followed suit. The tournament committee make it their business to promote these festive occasions, as well as holding a barbecue and a trip (mainly for the benefit of visitors) to Fox’s pub for dining or a raucous ‘session’, according to taste. Side events include a table tennis draw, chess, backgammon, telly, and pints of Dublin’s most famous export. 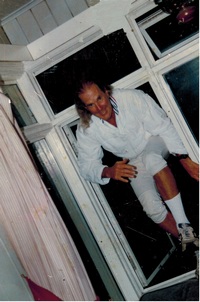 In 1999, the old wooden clubhouse was replaced, and the occasion was marked in appropriate fashion by our visitors from England, Scotland, New Zealand and the U.S.A. The Club House shook to where its foundations should have been under the applause for popular (i.e., Irish) winners. The new Club House has the added attractions of warmth and a unique view over the lawns from a height, although this means that one can no longer climb straight into the bar through the window.

Although the Championship of Ireland was first contested (according to Col. Prichard) in 1861, the earliest surviving trophy is from 1899, and was won outright, by virtue of four straight wins, by Herbert Corbally (brother of Cyril) in 1936.
The replacement was a handsomely-chased salver, which was in its turn won outright by that croquet colossus, Patrick Duff Mathews, in 1948. The Duffer generously re-presented it as a perpetual trophy – saving future committees a headache when Terence Read later won it nine years in a row! There is no plate trophy, but a smaller salver for the runner-up. This was presented in 1971 by David O Connor in memory of his friend Leslie Webb, who was drowned in the far East, while attempting to save another swimmer. Leslie had been runner-up to David in the previous championship. Many illustrious names adorn this salver, including K.F. Wylie and R.I. Fulford, attesting to the difficulty of raiding the honours of Ireland! The Doubles Championship dates from 1990, and the trophies commemorate Anne Healy (nee Hobbs).

The Founder’s Cup (handicap singles) is one of four matching cups in a celtic-revival design ordered in 1928 to celebrate Mrs Wilson (nee Barrett), who headed the group that set up the Club. Two of the others are played for at mixed handicap tennis, while the fourth was won by the Australian team against Ireland in 1934, and is now – as the “Eire Cup”- contested by the various State teams in the Interstate Championship, one of Australia’s highest honours. The Stonebrook Cups (another interesting celtic drinking cup design) were presented by Col Cooke, who also gave the equally glorious Coronation Bowls for the Co. Dublin event, to the All-Ireland Croquet Club of Kenilworth Square. When this club folded in 1919, the cups were “permanently lent” to Carrickmines. Another interesting trophy is the candlestick played for by the highest handicaps. This was the memento given to Mrs Evadne Bell when she won the Irish Ladies Championship in 1906, and re-dedicated in 2000 by her grandson, Even Newell.

From the beginning, the Irish Championship was supported by the top players from England, including Mr and Mrs Beaton, C.E. Willis and D.L.G. Joseph. Viscount Doneraile (nominally Irish!) presented a boundary-ball tester made by Ayres, which still does service, to “the Irish Associates of the Croquet Association”. Other illustrious winners have been J.C. Windsor (Australia), Jean Jarden (New Zealand), Stephen Mulliner and Aaron Westerby. Regular Irish players, Simon Williams (5 titles), Ronan McInerney (4), Edward Cunningham (2) and Mark mcInerney (2), account for most of the other recent years.

The final of the championship – along with the ever-popular Handicap Doubles – is the focus of Irish players’ season (if spectators) and ambitions (if contenders). Finals are often grim affairs with nerves proving the deciding factor, but the 2004 final between Mark McInerney and Robert Fulford would have to be the outstanding croquet occasion in the memory of most people who saw it – a real, five-game ripper.

The Championship of County Dublin started in 1909. The main trophy was sponsored by the Dublin and South-Eastern Railway, whose track ran by the Club. 2009 will see the reopening of this track as a light rail line connecting the no-longer rural Carrickmines with the centre of Dublin. Many other changes have swept over the neighbourhood in recent years, but the expansive view of the Wicklow hills is still much the same as the one that delighted the reporter of the first Championship of Co. Dublin.